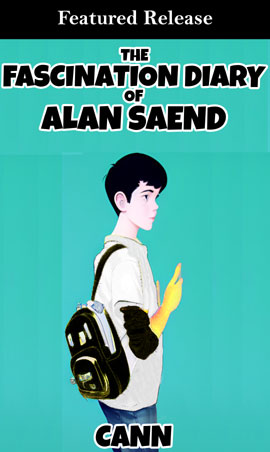 The Fascination Diary of Alan Saend

Alan has a secret: he loves shiny things. It’s a secret because he doesn’t know how to explain it to anyone else. Who could understand? He’d just end up embarrassed, right? So, Alan keeps his stash of gloves, bags, pool toys, and glossy magazines as his own private joy…at least until he finds a shiny object who’s also a person.

Buy This Book on Amazon

When Fluffy Dog opens a box filled with treasures from another planet, he and his friends become the Dyn’taren Guard: a team dedicated to making the world within their bedroom a nicer place. But a stranger known only as the Bright Hand is after the treasure, too, and the Guard already has its hands full dealing with scary skeletons, giant lizards, and one nutty little sister. Can Fluffy, Benny, Detective Dog, and the rest master the magic of the star wands and solve the mystery of the doll with no name?

You can buy this book on Amazon. I’ve planned the Dyn’taren Guard for a very long time; the earliest drafts of these stories were radio plays I recorded on cassette tapes as an eight-year-old, predating even The Case of the Crooked Candles (in my mind, Detective Dog and his team were always a subdivision of the Guard). After that, there were marker-and-pencil picture books, and I even typed up some short stories before I moved on to the Crimson Twig and, eventually, Children of Woodvale. I always kept these stories in my heart with the intention of someday reviving them for a young audience, and when that young audience turned out to be a friend’s children, I spit out Power of the Name in a six-week fugue state. There will be more!