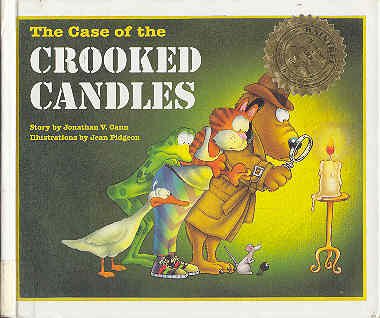 This is a children’s book about Detective Dog and his team of talking animals (who were named after my elementary school classmates) trying to solve the mystery of a jewelry store heist in my hometown of Westwood, NJ. It was created from a short story of mine that won the grand prize in the Raintree Steck-Vaughn Publish-a-Book contest when I was in sixth grade; there was even an all-school assembly where the publisher gave me a giant check, plus I got an official commendation from the town. The illustrations were done by Jean Pidgeon, and I still have the original proofs.

Unfortunately, what I don’t have are the rights to produce more copies, so Crooked Candles remains the rarest of my books. Raintree Steck-Vaughn seems to be several levels of buyouts into nonexistence at this point, and as a result, new copies of Crooked Candles haven’t been printed in decades. The paperback edition, which came out a year after the hardcover, is especially hard to find. Notably, there might be a few autographed hardcovers floating around from a signing I did at Shaw’s Book Shop in Westwood when I was 13, which felt like a pretty cool way to kick off junior high.